5 Reasons to Make a Class C Your First RV

After nearly a decade of dedicating our efforts to luxury diesel Class A coaches, we took what we learned and successfully applied it to the Class C format. The lineup has helped make the Entegra Coach lifestyle available to a wider range of travelers than ever.

So, if you’re one of the many travelers looking for a way to have more control over your travel, we thought we’d share some of the top reasons to make a Class C your first RV purchase. 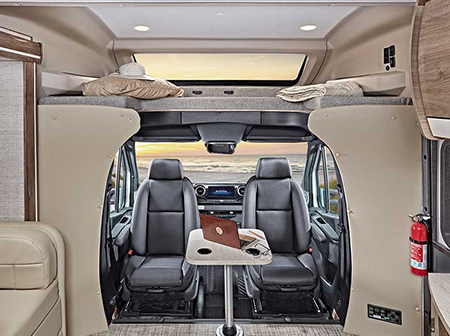 They may not be as inexpensive as some smaller towable RVs, but on average, Class C motorhomes are less expensive than their Class A and Class B motorized counterparts. It might be surprising that Class Bs are more expensive off the lot, but their customized chassis adds cost.

2. Can do minor service yourself

If you know what you’re looking at when you pop the hood of your everyday vehicle, you won’t be surprised when you look under the hood of most Class Cs. The same goes for the underbelly. It’s more likely you’ll be able to save a few bucks and a lot of time by performing minor service or diagnostics yourself. If you don’t plan to do any service yourself, you’re in luck too. With a Class C, you may not need to find a specialized RV service center to get something worked on.

In the case of motorhomes, the chassis/engine may have a separate warranty from the rest of the coach. You’ll want to consult it before performing any major work yourself.

You may be thinking the easiest way to travel is in your everyday vehicle with a towable unit behind you, but Class Cs are popular among new RVers for how natural they feel. They are a lot like your typical truck or SUV; the driving height is about the same, visibility is similar. And while you can tow a small vehicle with most Class Cs, you won’t need to learn new backup angles or get comfortable with a completely new feeling of stopping, starting and merging.

Another factor that’s important to some, especially on long hauls, is climate control. When compared to a Class A, the smaller driving area is generally easier to heat or cool.

4. Navigating campgrounds can be easier

Navigating campgrounds can be easier in a Class C, in a couple different ways. First, because of the drivability discussed above, pulling in and out of campsites and navigating winding paths is pretty simple. Even more important, these shorter units may increase your chances of finding a campsite. The average campsite is about 35 feet in length, so there is campsite inventory for shorter RVs like those available in the Class C market. Our Qwest model, for example, is available as short as 24 feet. 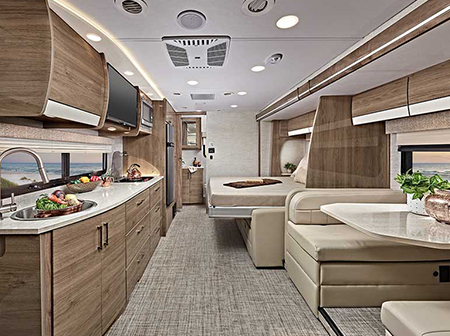 5. Good for those who plan to travel light

When shopping for RVs, you’re often weighing trade-offs. If you plan to travel light, a Class C might be right for you. They generally have less storage space, but for some it’s worth the sacrifice because you’ll get more functional living space in return. Though smaller, Class Cs typically still include multiple sleeping areas, a full bathroom, a well-equipped kitchen and dining area.

You can learn more about why we expanded our lineup here, and find floorplans, specs, standards and options for each model here.

How much can a Class C tow?

Though they are typically smaller, Class C RVs can sometimes weigh as much or more than their Class A counterparts. The tow capacity of Class C RVs can usually range between 5,000 and 12,000 pounds. Always verify a Class C motorhome’s tow capacities and equipment in your owner’s manual before hitching up.

What is a super Class C RV?

Also knowns as Super Cs, these motorhomes are longer and more spacious than traditional Class Cs. They are also diesel powered, while most other Class C motorhomes are gas powered. The Accolade and Accolade XL are the Entegra Coach Super C RVs.

Can anyone drive a Class C RV?

Basically, yes. Class C RVs are much shorter and typically weigh less than the license limits in most states.

5 Reasons to Make a Class A Your First RV