Two do five in 58- Exploring Canada

Doretta and Larry are happy owners of a 2019 Cornerstone, 45F; their second Entegra Coach. A two month guided tour of Alaska in 2016 inspired them to sign up for a 58 day tour of the Canadian Maritime Provinces for the following summer. Life happened in the way that it does, but their unplanned delays allowed them to meet Robbin and Chuck two years later at an Entegra Coach rally, and they would turn out to be the best friends to sign up and come along on their Canadian excursion. Robbin and Chuck joined Doretta and Larry at the rendezvous point, the Pumpkin Patch RV Park in Hermon Maine for this great adventure. 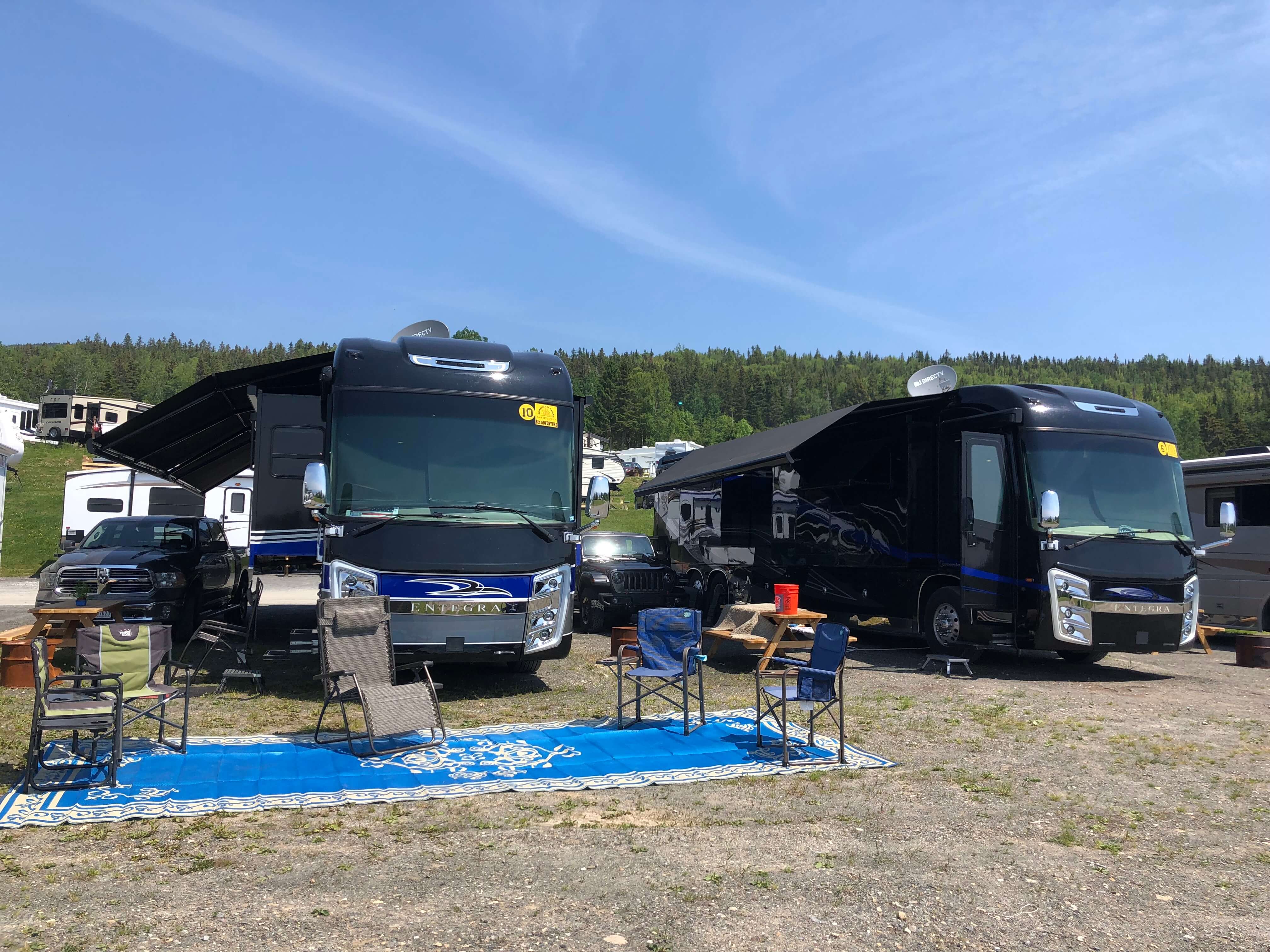 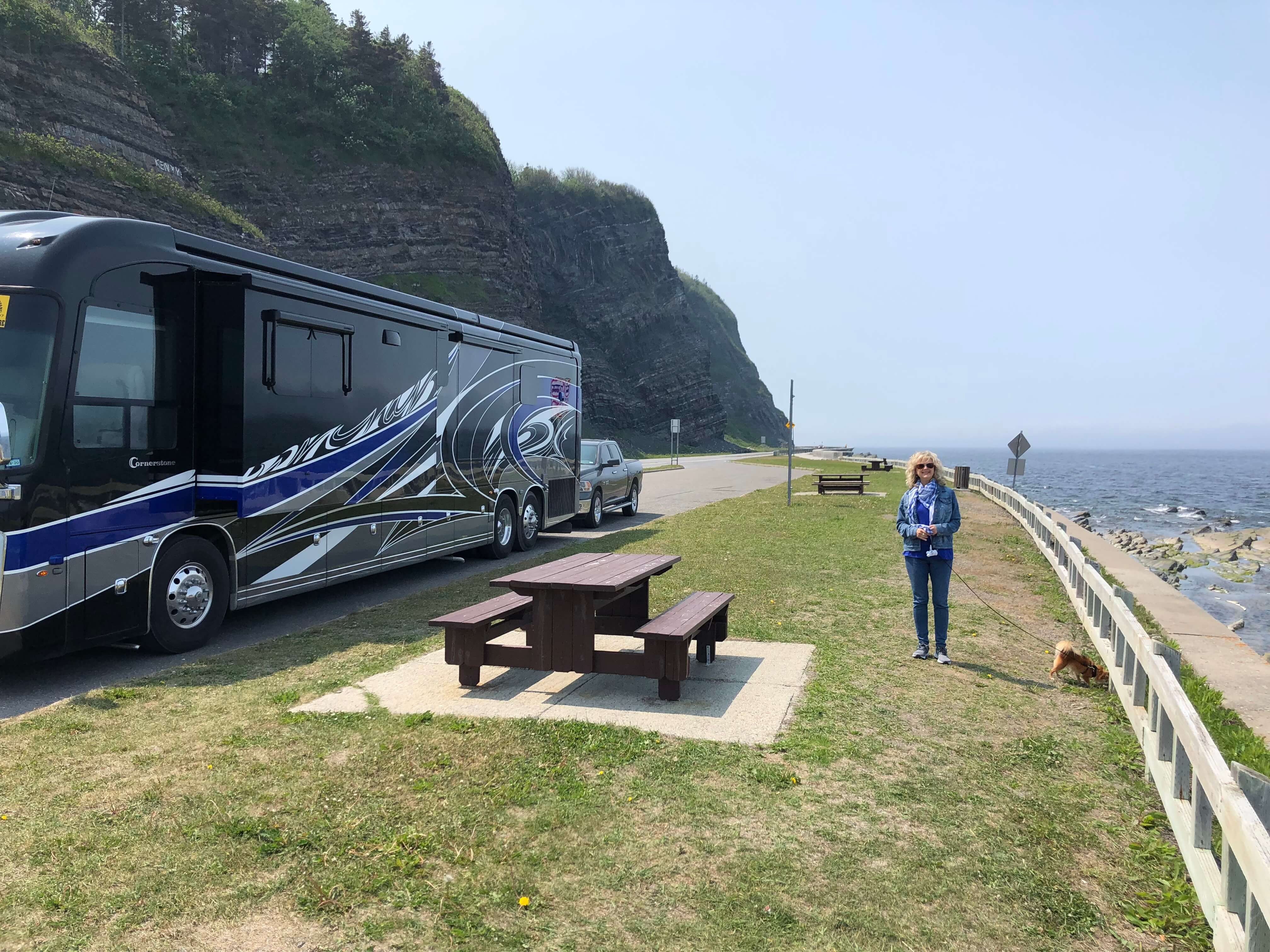 According to Dorretta, many people are hesitant to do “guided tours.” Even Chuck was reluctant! “RVers* seem to typically be an independent group,” says Doretta. “Often we enjoy traveling on our own, but sometimes, particularly in an unfamiliar place, it is nice to have all the RV parks pre-reserved, local tours and tour guides pre-booked, ferries pre-reserved and the ability to have wagon masters* and tail gunners* who are looking out for you just in case you have any problems on the road.” Doretta says majority of the planning and scheduling is completed by the company you tour with; they do a lot to make your trip relaxing and enjoyable. 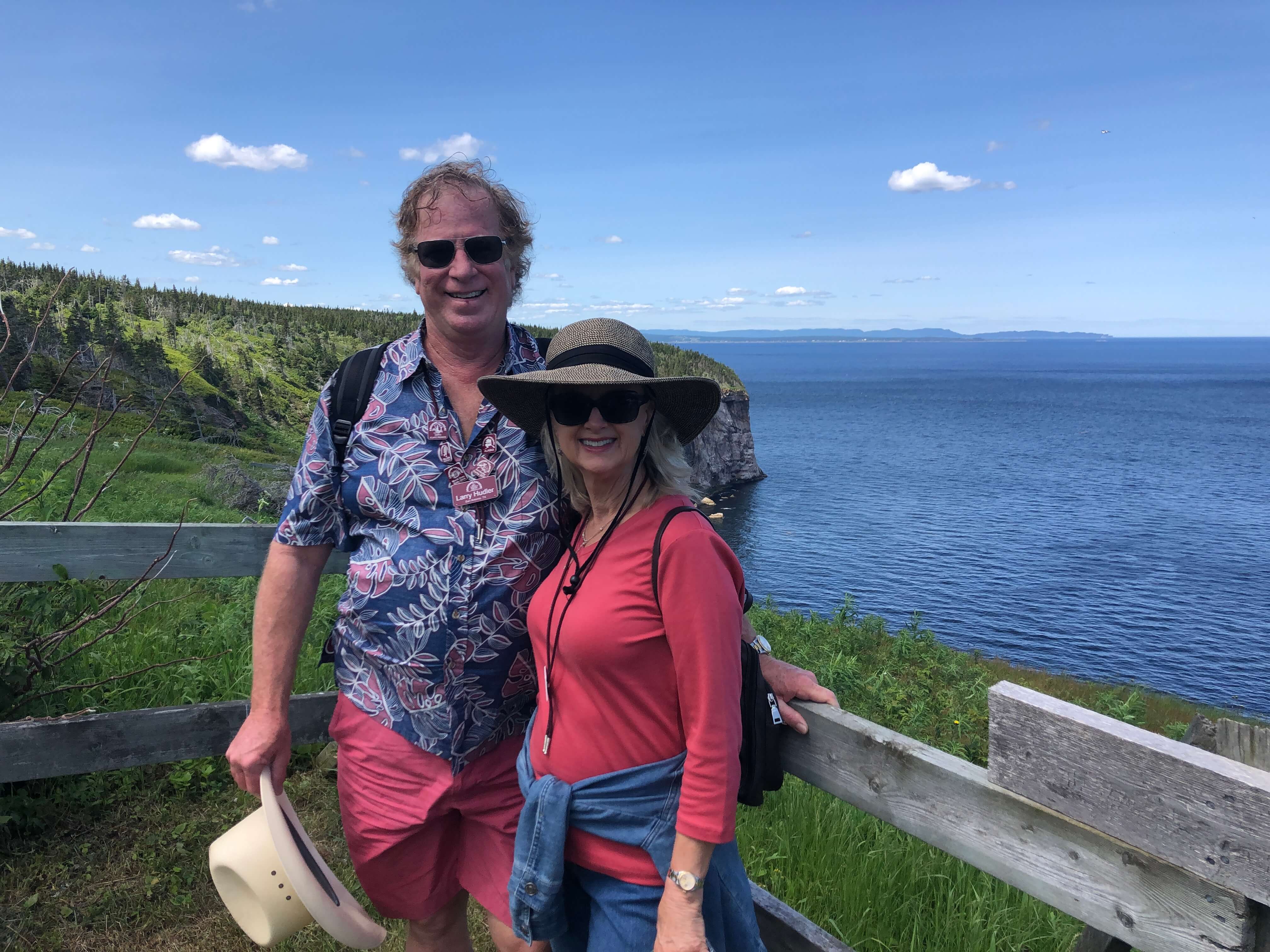 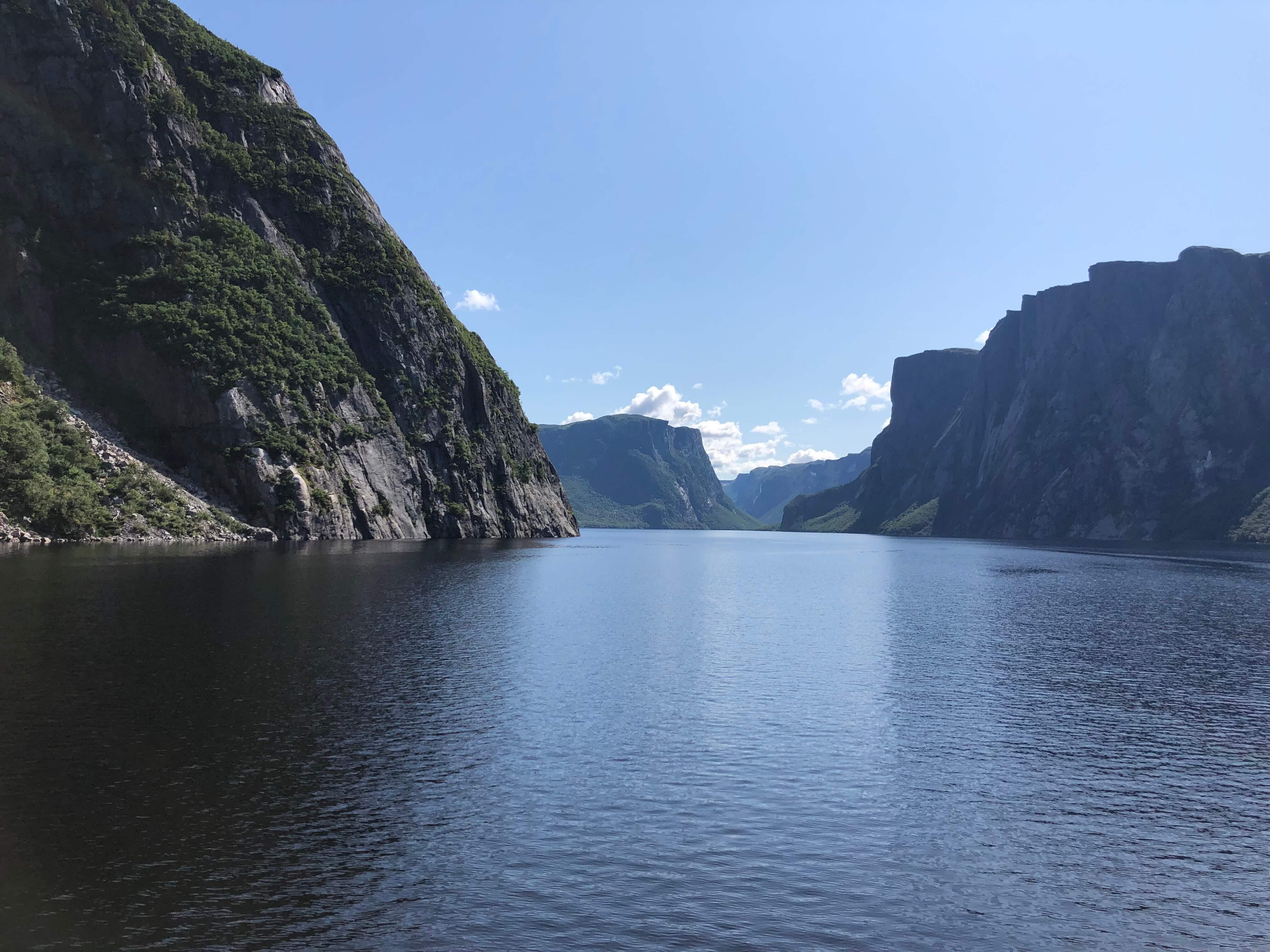 This 58 day, action packed adventure, included 24 different RV parks, five Canadian provinces and an overnight stay on a ferry. There was a lot of traveling and constant new sights to see and explore. As an added benefit, the tour company provided a thorough trip-planning log that the couples were able to review each evening before the next day’s travel. The log contained a list of fuel stations that big rigs would fit in, scenic views, best restaurants and road construction to watch out for. A typical travel day consisted of the wagon master leaving about 7:00 AM and the tail gunner leaving about 9:30 AM. If you were not a wagon master or tail gunner, you were free to depart anytime between those two times. 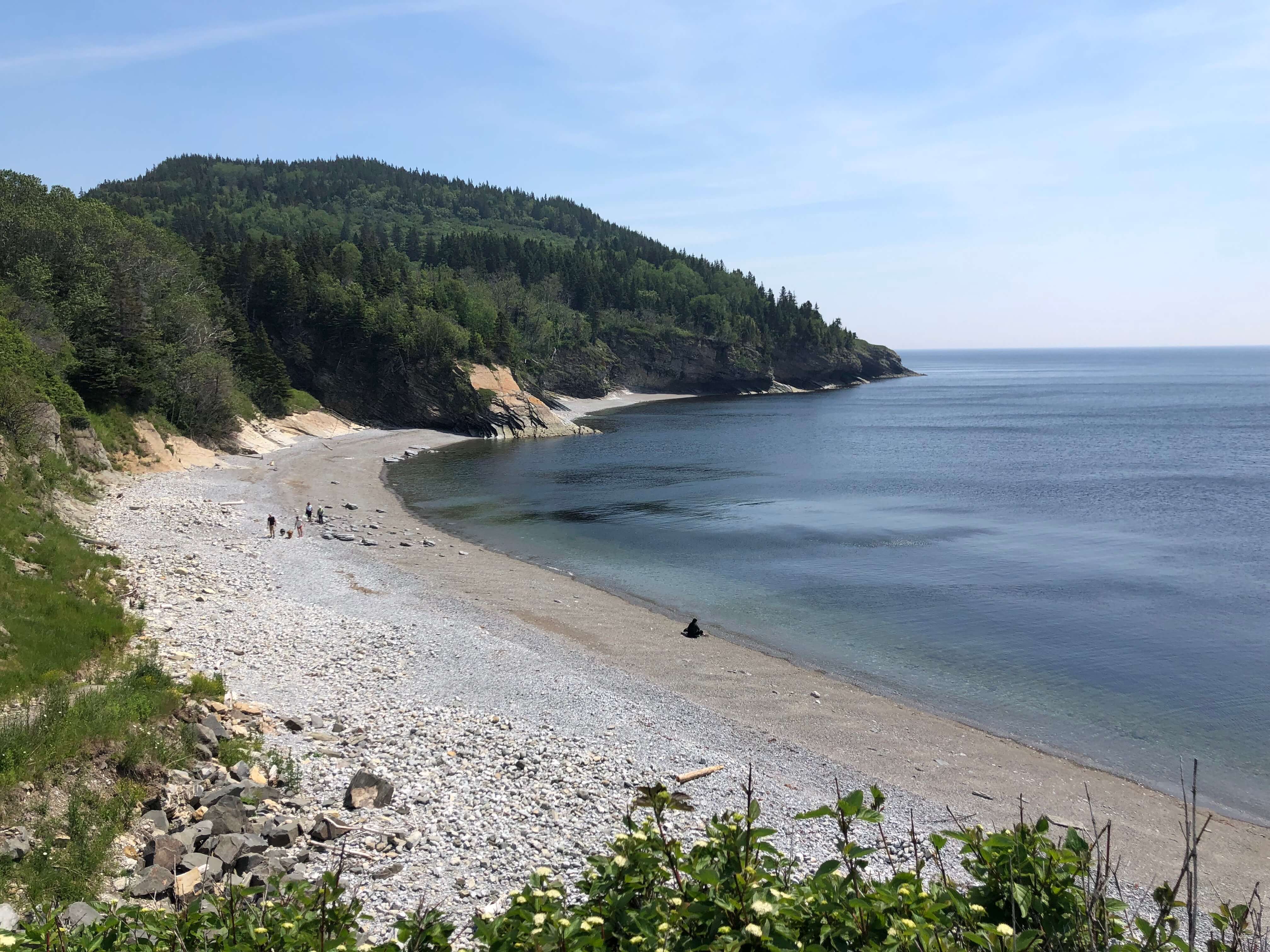 The tail gunner reminded members of the group to zero out their odometers prior to leaving the park, because the trip log provided a mile-by-mile description of directions and recommended stops to see in route to the next destination. Guests were allowed to stop wherever they wanted for sightseeing, lunch, fuel or just to rest. If you stayed on the main route, the tail gunner would stay behind the last person to assist if any problems arose. The longest travel day on this adventure was 259 miles.

As impossible as it is in such a short piece to explain all of the places they visited, Dorreta and Larry have given an overview. 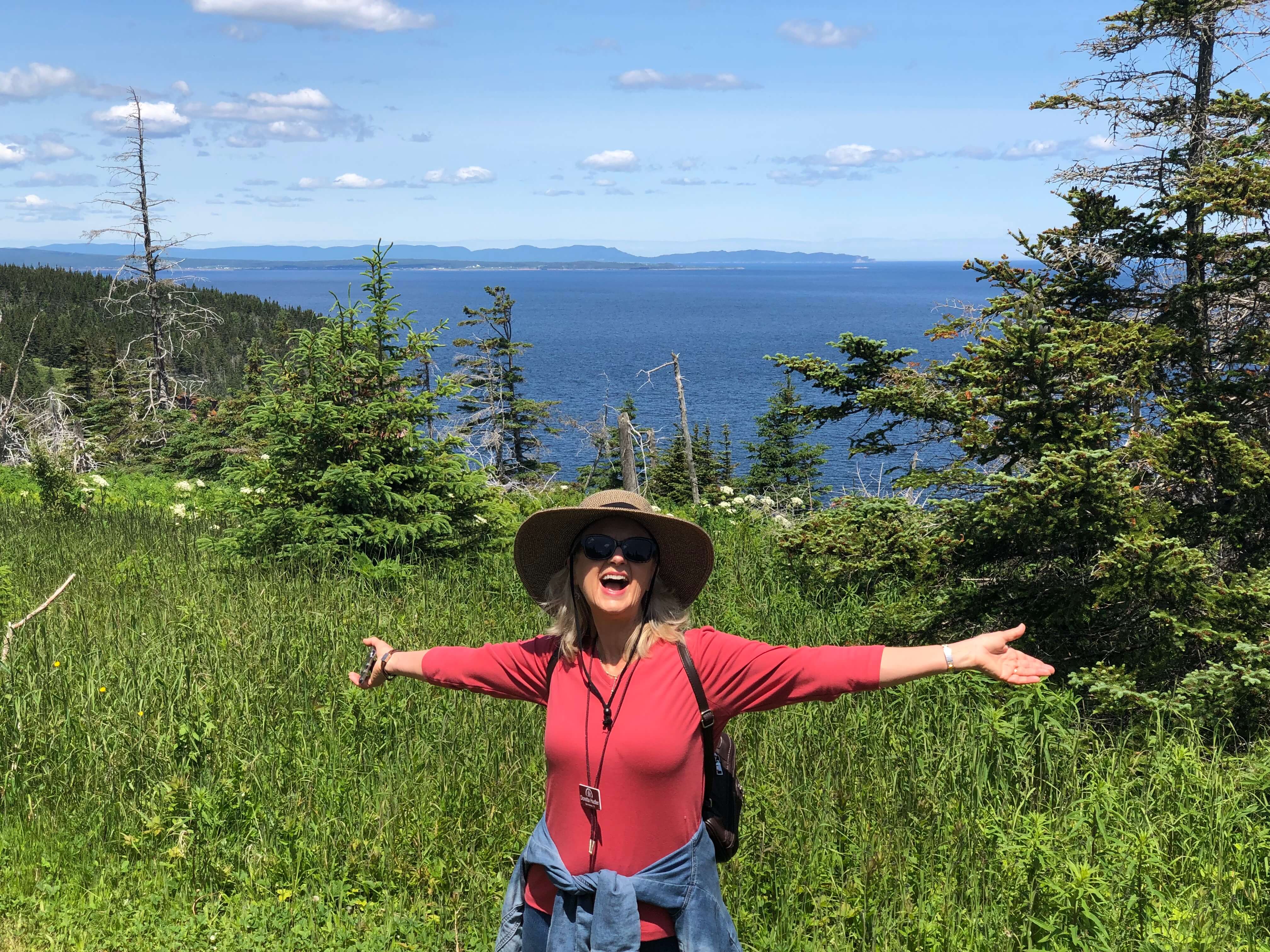 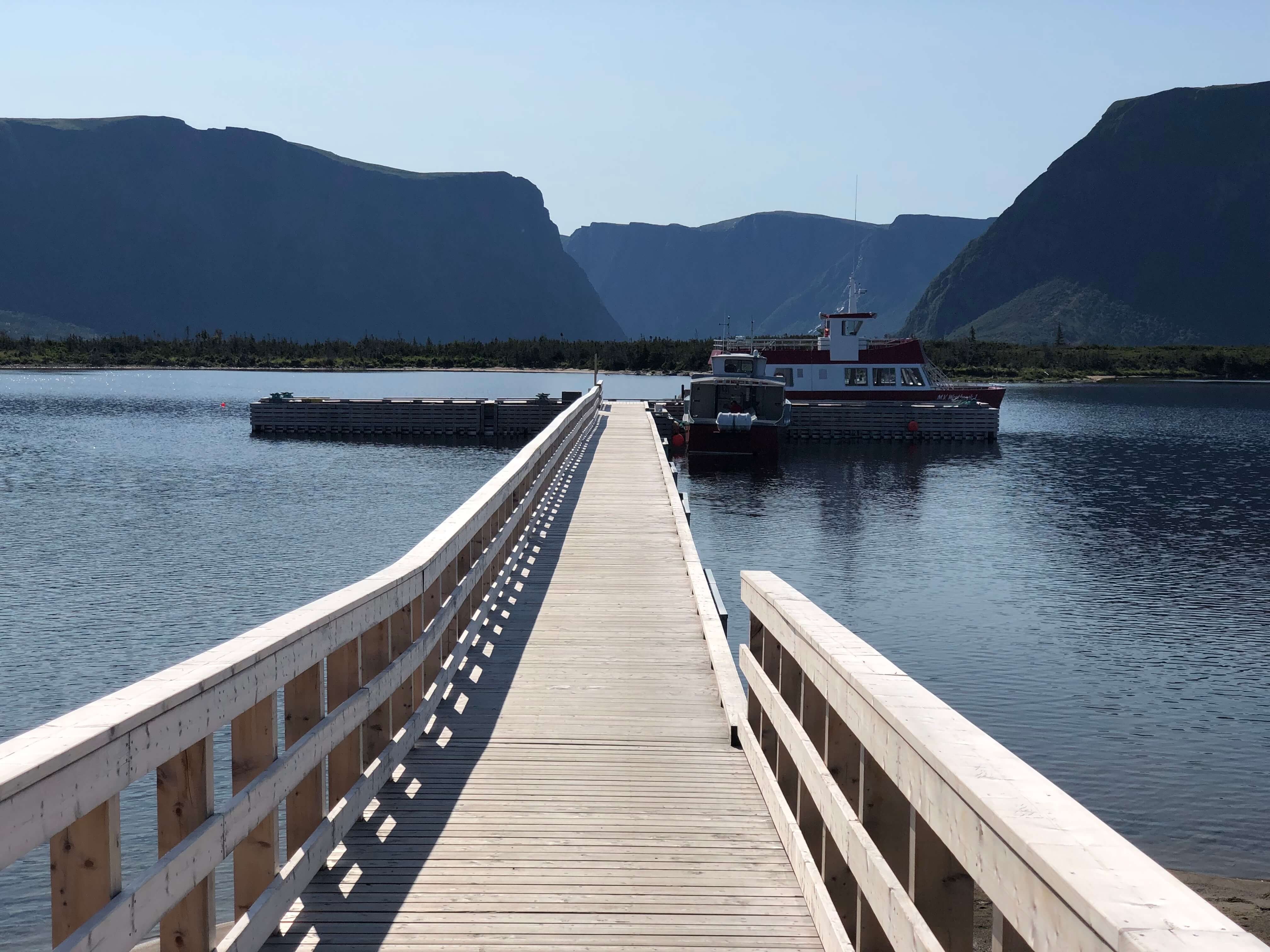 “On June 28th, 2019 we first met our fellow travelers in Hermon, Maine where we had orientation, a social and welcome dinner” says Doretta. This initial meeting also gave the tail gunner a chance to inspect all the coaches to make sure they were up to the task ahead. “Our first day of travel was the day following our meet and greet. We traveled 219 miles to the Quebec City, KOA. This portion of the trip included crossing the border. The wagon master briefed the group prior. Border patrol agents asked us a variety of questions, including if anyone was carrying guns or ammo.” Since Doretta and Larry were not carrying firearms, they were able to cross the border with very little fanfare. They joked that due to their Texas license plates, there was an assumption by the border patrol that the Lone Star couple might have guns tucked away.

After two days filled with great tours of the Old City of Quebec’s, amazing water falls, churches and ice cream shops, the entourage traveled 223 miles along the Saint Lawrence River to their next stop, Métis-sur-Mer, Quebec. The group of coaches would eventually go to three different RV parks in the Quebec Province and travel 758 miles. Sights included amazing areas of the more remote, but beautiful locations on the Gaspe Peninsula. The entire journey was along the St. Lawrence River, leading into the Gulf of St. Lawrence.

The group briefly traveled through the province of New Brunswick, where they saw amazing cliffs and visited several quaint, coastal towns.

The crew of coaches eventually made their way to Prince Edward Island, where they say there are 58 shades of green to be seen. After experiencing the beautiful rolling hills, farmlands, coastal grasses and seascapes, Doretta and Larry believed it to be true. This is also the scenic setting for the Anne of Green Gables book series. In the multitude of different inlets and bays, there are many seafood farms; mussels and clams are a major export. This is also where they saw their first small music concert called a Ceilidh*. Musicality is very common in these northern outposts as a means of entertainment through the long winters.  It was during this part of the trip that the couple became familiar with the Ugly Stick*.

On to Nova Scotia Province where the caravan visited the cities of Annapolis Royal, Lunenburg, Halifax and North Sydney. Annapolis Royal is a historic seaport dating back to the 1600’s. During the day, they saw the Royal Historical Botanical Gardens and in the evening toured the original city graveyard by candlelight with an amazing local guide. According to Doretta and Larry, Lunenburg has a beautiful Old Town area, perfect for strolling the small shops and restaurants. A must-see is the Fisheries Museum, which documented the plight of the original anglers who settled the town in the early 1700’s. Halifax is a bustling city with an active harbor where the group enjoyed a sailing cruise on a restored historic tall ship. They visited gravesites of folks who perished aboard the Titanic and heard personal stories by local guides. North Sydney is on Cape Breton where the group traveled along the Cabot Trail in the Highlands National Park.

In North Sydney, the group, with all their coaches, close to 100 cars and several 18 wheelers, loaded onto a large ferry for a 16 hour overnight cruise to Newfoundland. The tour group spent three weeks on Newfoundland and traveled 1,300 miles through major cities, small coastal towns and a handful of Canadian National Parks. The locals were very friendly, pleasant folks, and the group made a lot of Newfie* friends. The country side was reminiscent of Scotland, with its mountains, forest, highland lakes and beautiful sea sides - many with tall cliffs and others with sandy beaches. 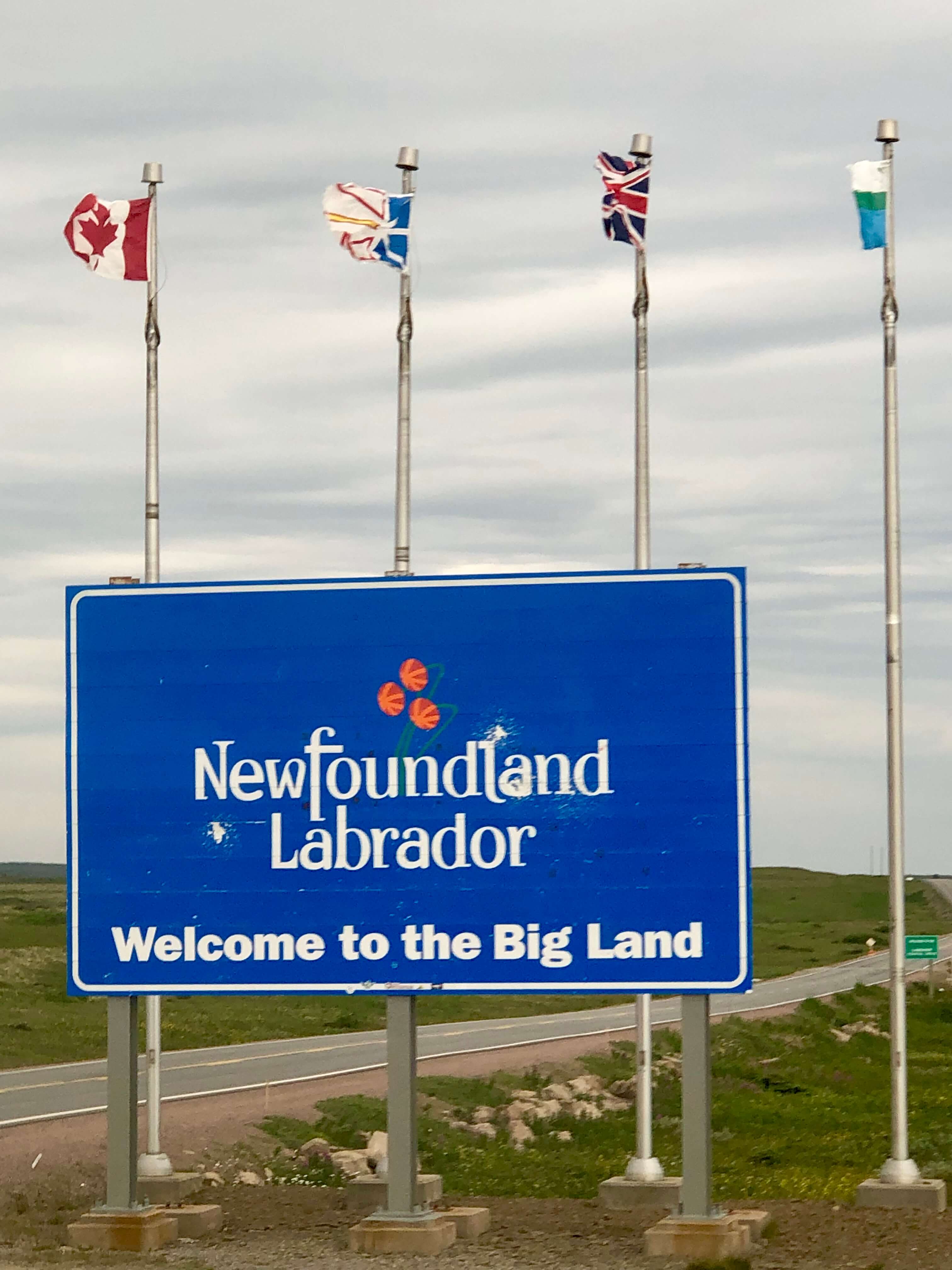 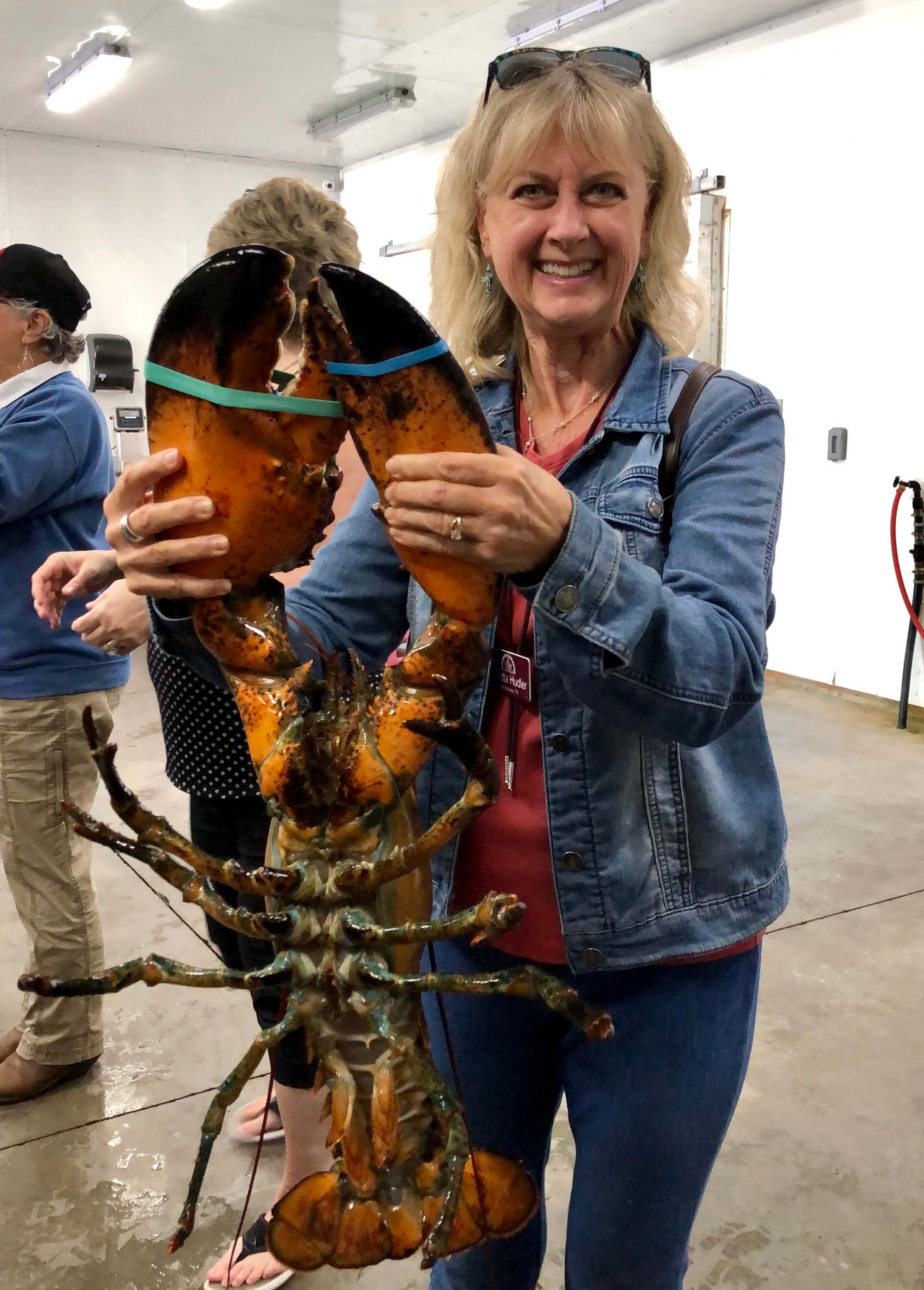 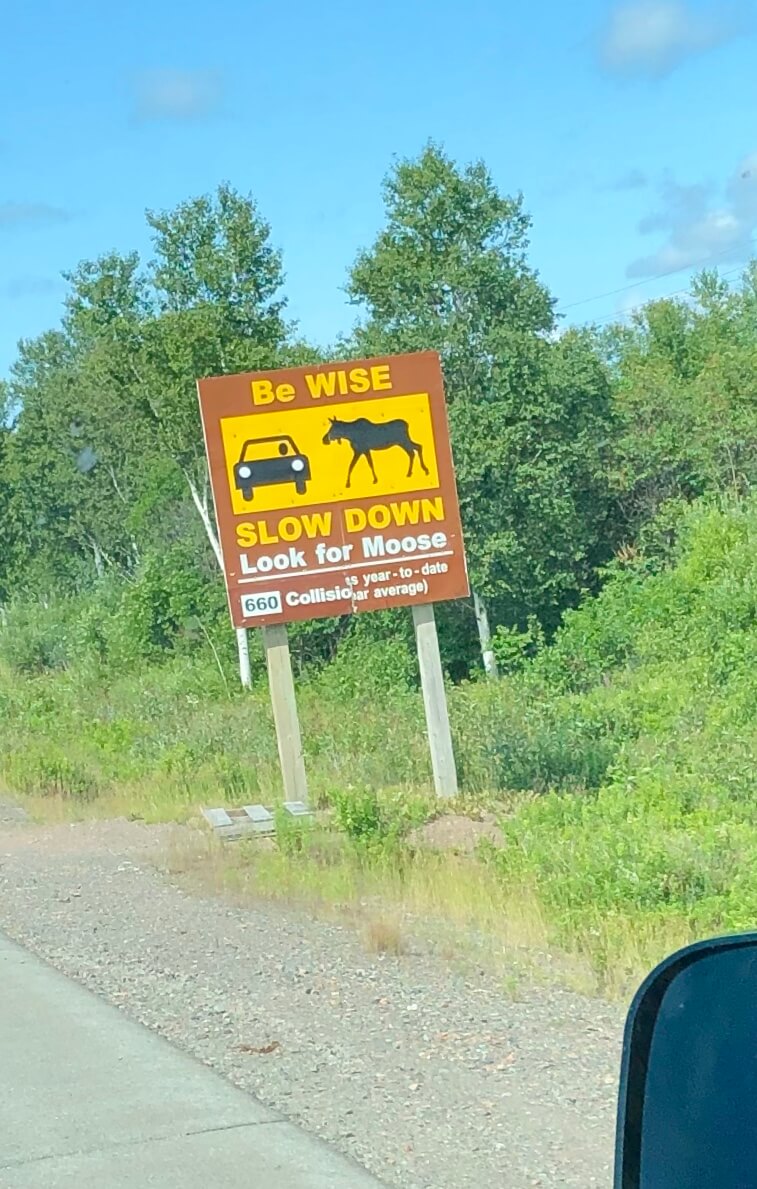 All good things must come to an end, so it was back to the Ferry Terminal at Port Aux Basque, where they loaded the coaches onto the ferry and headed back to Nova Scotia.

“We spent a week sightseeing our way to St. John, New Brunswick where we said goodbye to our forty new traveling friends and headed back to the States. We look forward to bumping into many of them “down the road”!”

Dorretta, Larry, Robbin and Chuck traveled 3,738 miles on this exciting adventure and say the sights they saw exceeded the miles traveled.

*RVer – a user of a recreational vehicle

*Ceilidh (pronounced Kaylee) - a social event at which there is Scottish or Irish folk music and singing, traditional dancing and storytelling. It’s also referred to as a kitchen party, because it resembles a gathering at a home that ends up in the kitchen with friends playing their instruments.

*Ugly Stick - a beloved, homemade instrument, which can be “played” by someone with no musical talent, but can sing like a Stradivarius (violin, viola or cello), when in the hands of a talented local.